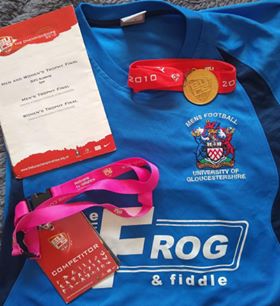 Uni Of Glos 1 Uni of Worcester 0

Looking back 10 years to this game, remembering the players, the season long journey to get to this point, the Bucs National trophy win weeks earlier in Sheffield and the two trophies at Sports awards, I realise that haven’t sat down and thought about what made us a winning team for a long time. Thinking about it now and struggling to define it I can only say that

the closest I can get to understanding it is, that we were the perfect storm. This team was a collection of outstanding people whose individual traits, physical strength and emotional resilience combined to make the most successful team the college had ever seen.

Don’t get me wrong we had tactics, we had patterns and ways of playing and we most definitely had a culture, but our real strength, the one that made this team stand out against others, was down to a unique combination of human beings who took the field and played their hearts out.

They were somehow perfectly in balance, not something i’ve ever seen again although I’ve tried many times to recreate with other teams. Some of the 2nd years and 3rd years had played together already and some had been successful, but not on the scale of what they did that season, and added to them were two freshers, Keenleyside and Mawer, who slotted in like the two missing pieces of the jigsaw.

Of course time passes and people leave college and people move onto other jobs and when I was putting together some pictures for this article I messaged the lads and asked who did we beat that day? who scored ? The memories were fuzzy and we didn’t have many answers, other than we were there and we won.

Of course this varsity game is different in the sense that we have some highlights of the game, filmed by my Dad up in the Colin Farmer stand in the now named Jonny Rocks Stadium.

Looking back at these highlights makes me feel breathless with excitement and pride. I hadn’t watched them in many years, probably since 2011. And although I never forgot the lads I forgot what they looked like on the pitch, how competent and assured they were as footballers, how good they were as technicians and as a team.

It’s wonderful to be able to see them in action again and I know for sure that they would all give anything to rewind to this point in our life and enjoy this day one more time.

The team picked itself through the National Trophy Cup Run and the same team that won that trophy started this game.

GK Miles Palmer the man with the dodgiest trim in college and a love of Alice bands. Milo was always ready to launch quick counters with his overarm bowling style and quick feet, he was Ederson when Ederson was a little boy.

RB Adam Dunsford the hardest working, most single minded winner who pushed us towards victory every game, known for his determination he could could be often found running up nut hill after a game if he felt he hadn’t put enough effort in.

LB Tom Etheridge legend county left back, who was on football focus with his brothers during Cirencesters FA Cup Run, Ethers was always keen to fulfil his personal targets every game; a) one no look pass and b) one booking

CD Chris Senior The Rolls Royce defender who single handedly won us the cup semi final with the bravest clearance on the line ever seen at the Folley in the dying minutes.

CD Adam Mcglaughin, the self styled best looking man in college was the perfect foil for Senior, Ads was a stopper, a brave, tenacious winner who could leap like a salmon to head the ball.

CM Andy Lewis, the legs, the South Wales Yaya Toure, this lad covered every blade of grass and could land a ball on a pound coin with a 60 yard diag ping.

CM Joe Cole the enforcer, Joe was there to dominate the midfield, make the tackles and win it back, he was another winner he refused to lie down and always battled to the end, he still has the Worcester No 6 in his back pocket from this game.

LM Dave Bostock – possibly the smallest man in college, Boz used to terrorise defences across England with his rapid head down running style and was always popular in service stations as he posed for pictures sitting in the Postman Pat delivery truck.

RM Ricky Newton – the closest college ever got to having Gabriel Battitusta on the pitch in blue and blue. Ricky was a Ferrari power wide man with a great brain and the uncanny knack of scoring back post headers in the dying minutes.

CF Dave Keenleyside – our number 10, he was the man who linked it all up, play it into genie, he spent most of his time with his back to goal making the play.

CF Chris Mawer – another power forward who when he was ryled up, usually after some big centre half kicked lumps out of him, could break through defenses at pace and finish with deadly precision. Mawer lives long in St Paul’s Legend as the man who scored the winning goal in the BUCS National Trophy Final.

Andy Boxall – an absolute monster of a centre midfielder Boxy had the biggest thighs in college.

Luke Coles – Another quality defender who cruised through games with a calm assurance.

We won after a hard battle and a few scares. A diving lunge from Dunsford in the 6 yard box getting onto a pass from Lewis, Dunsford had ran the length of the park all day from Right Back. It was a fitting end to the most season. Dunsford drove that team all season with his relentless energy he surely must rank up there as one of the greatest college captain’s ever.

We have 4 teams who are all affiliated with the British Universities and Colleges Sport (BUCS) leagues. All  squads are very competative and do rotate very often depending on individual performances on and off the pitch whilst representing UOG mens football.